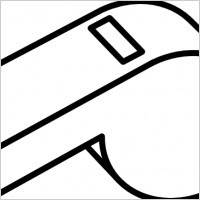 During the start of our training we were frequently told about the importance of whistle. Whistle as we were told was a unique device. It had a great role in the life of a Policeman. It is a simple device and it was going to play a important part in our training programme. We were instructed to come to the parade ground within 15 minutes whenever the whistle blows.If the whistle blows at night we had to come out of the barrack immediately. One day the whistle blew at night. The whistle blewer was Boot Kali . Boot Kali was one of the person authorised with the whistle. His real name was Havilder Akon Borah.He was as dark as boot polish. Therefore he was nicknamed as Boot Kali by some of our intelligent cadets. Upon hearing the whistle there was chaos in the barrack. It was bed time so no one was properly dressed. Some were wearing half pants. Some were in their jockeys. Anil Das was wearing a short towel.It barely circled his waist. We were told to bring our torch with us. I was unable to guess what was the matter. My bed mate Ravi Prasad guessed that some emergency might have cropped up as there was tension going on with neighbouring Bangladesh at that time. Ravi Prasad is originally from Bihar. He spoke both Hindi and Assamese. During the start of our training we were each asked to buy a 3 battery eveready torch. I had one pen sized torch of 2 pencil batteries. I came out with that torch.I was thinking that i might get a scolding for my small torch. Ravi's torch was brightest of all. It was a big chargeble "Made in China" torch. Everyone came out of the barrack with torch in their hands. Some came out with two torches. We were told to stand facing the barrack with our hands resting on the barrack wall. Anil Das too stood facing the wall with his hands raised. Boot Kali enquired if anyone was left inside the barrack. He started to count one by one. We felt angry as we were made to stand like offenders. Soon the D.S.P arrived at the scene. Havilder Boot Kali reported to him that there were 50 cadets present with their torch in hand. One by one he was checking the torches. Boot Kali was behind him with a pen and paper. He came to me, looked at my torch. He switched it On and Off. I thought Boot Kali will write my name for not having a bigger torch. But he didn't. They moved on to Ravi Prasad. He showed them his torch with great pride . He pointed it to a coconut tree. The coconuts were visible with his torch light. Bohut Faida hai is torch ka, said Ravi. The D.S.P signaled Boot Kali with his eye to write his name. Ravi Prasad was very happy. Now It was Anils turn. As D.S.P was about to examine his torch a strong breeze swayed his towel upwards. Though DSP didnot liked the view , it reduced our irritation level a bit. Everyone felt like laughing but controlled including me. His name was written too. Subsequently they checked the last man and the whole episode was over. We were told to go inside the barrack and sleep. The next day at around 1.00PM , we received one Deparmental Order. There were 35 names written on it. Ravi Prasad's name was No.1. It was actually a warning issued to the 35 cadets of our barrack for using rechargeble torch lights. The torchlights were to be submitted immediately to the training authority. We then remembered that during our appointment we were made to sign various undertakings.Use of devices operated by electricity was strictly prohibited. Ravi Prasad quickly removed the chargable batteries and the bulb. He actually handed a empty torch with a fuse bulb in it. Others followed too.
Posted by Bedaanga Sarma at 00:55

You guys really had a fun time during your training days...And the breeze made his towel to fly with it

An interesting episode nicely described.I could understand at times people have to be a bit ingenious.

Another good post from you. Wondering why electrically operated devices are not allowed in the police training.

Thanks Harsha for the comment. Yes , the DSP had a glimpse when the towel flew with the breeze. :-)

Thank you Patnaik ji for the comment. It was prohibited to reduce the electricity bill of the training school.

Really a very fun incident indeed.After thT incident Ravi got his famous nick name FAIDA.Very often I wonder how did we survive the training.We would have lost our job in first few days if the rules were as strict as the guidelines.And a very well write up too.

Yes, it was. You have a good memory.Thanks for the comment.

Nicely related. I too remember my training days, we had to be on our toes all the time.