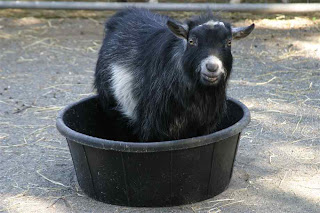 I was posted at Bilashipara Police Station of district Dhubri in Assam during the period from April 2004 to June 2005. That was my first posting after completion of training. The police station was at a distance of one KM from the market area. It was quite a peaceful place. The residents were mostly Bengali speaking people. The people were very friendly. The Police Station staff were also very friendly and co-operative. I have many memorable incidents from that place of posting. I am going to share one . One morning when I was inside the P.S concentrating on some serious work I saw constable Porbeswar Basumatary pulling one goat inside the thana campus. It was a black healthy goat. Porbeswar was a thin man. Yet he managed to tie the goat to a wooden post. I asked him whose goat was that and why he has tied it to the post. He replied that he bought it from the market after intense searching. Black goats are very rare as they are used for sacrificing in various rituals. He was not going to sacrifice this goat. He will set it free in the name of his son. Saying this he left the room. Every one noticed the goat as it was baying loudly. One visitor enquired if there was a feast in the thana. Porbeswar didnot say anything. A light drizzle started and I concentrated on my work. The light drizzle got converted into a heavy downpour. Porbeswar ran outside and struggled to bring the goat inside. In this process he got wet. The goat was completely drenched in rain water. He tied the goat to a bench in thana verandah. I again concentrated on my work. My attention was diverted when my colleague Baishya guffaowed and pointed to the goat. The goat was loosing its black color. It was actually a white goat with black patches. The goat trader had painted the goat with black color for more profit.😃😃😃😃 Porbeswar Basumatary was duped by a rogue goat trader.The news spread like wild fire. It caught the attention of Asomia Pratidins correspondent Debojit Neogi. Asomia Pratidin is a well circulated daily in Assam. The news was flashed after two days in the daily. Porbeswar became a laughing stock for some days. He went in search for that trader but the trader was never seen again.
Posted by Bedaanga Sarma at 23:48

Very funny,it reminds me of a Salman Akshay film

He he, I wanted to read more as to what happened to the goat :)

Thank you Abhra for the comment. The goat simply vanished.. :-)

So, what did happen to the goat?

Thank you Adithya for the comment.Porbeswar vanished with the goat after the incident.He returned next day for his duty. He became a topic of discussion for some days :-)

Funny things always happen to you and we love to read them :-)

Thank you so much.